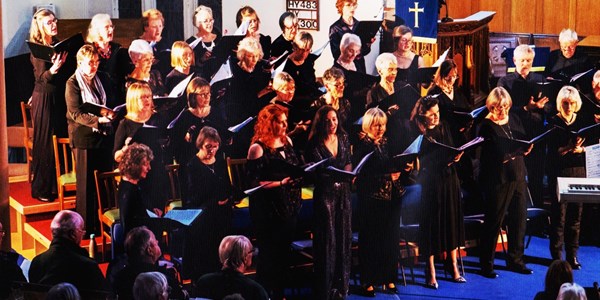 The Peninsula Choir was set up in September 2010 and at its height there was a membership of 50 with an average weekly attendance of 35. The re-established choir at the moment has a membership of 25 and is looking for new recruits, particularly gentlemen singers.

Stephen Adam, formerly of Scottish Opera Orchestra, led the choir from its inception until Covid Lockdown in March 2020. In those years the mixed voice choir gave two concerts yearly.

Lockdown brought a cessation of rehearsals and with Stephen moving away from the Peninsula, the committee, many of whom had been with the choir since it began, wished to stand down. With no apparent knowledge of when singing indoors could restart, there appeared to be no way forward.

However, a few determined souls decided that their choir was worth fighting for and a new committee was formed at a Special Meeting held in August 2021 and Gwyn Simons appointed as their Chair.

With little money in the bank, the task of finding a new Musical Director might have been daunting until providence fell into their laps with the move back to Scotland of Moira Frize-Williams.

Moira, who was born in Helensburgh, is a highly qualified teacher of music, singing and piano together with her experience of leading choirs over many years and the Peninsula Choir was highly delighted when she agreed to be their Musical Director.

The choir has a mixed repertoire of Classics to Pop, Folk to Musicals and everything in between. Moira, as Musical may continue along those lines.

Bearing in mind the choir only restarted rehearsals with Moira on 29th October she is very ambitious and would like, if it can be arranged, to have an initial concert with the choir before Christmas.

So watch this space !

With the Scottish Government Covid regulations in mind, we currently sing once seated without masks and at least 1 metre apart. To make everyone feel more secure, members are being asked if they would be willing to take a lateral flow test before coming to choir rehearsals.

As a Community Choir we never ask for Auditions - a love of singing is all that is required.